The Turner Neal Museum of Natural History is located on the University of Arkansas at Monticello campus. The Pomeroy Planetarium is an integral component of the museum. The Museum displays a variety of natural history materials including invertebrates, fishes, amphibians, reptiles, birds, mammals, fossils, minerals, and plants. The planetarium sponsors presentations demonstrating the structure and diversity of the universe.

The museum is open by appointment during the academic year, Monday through Friday, from September through April. We welcome visitors to our museum, however, since the faculty responsible for the Museum also teach full time, there may be short periods during the day when the building is not open. For organized groups, such as school classes, we call 870-460-1016 in advance to schedule a museum visit. We look forward to seeing you and hope you will visit the Museum and Planetarium often. 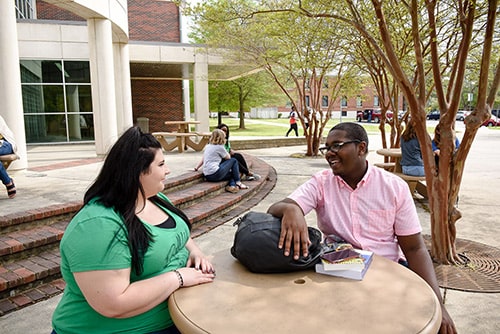 In the late 1960's Dr. Wallace Thomas of Dermott, then a member of the Arkansas Agriculture & Mechanical College Board of Trustees (now UAM), provided the impetus for a natural history museum. Dr. Thomas felt such a museum would add support to the new Wildlife and Fisheries Program which he helped UAM obtain in 1971. Dr. Thomas, Mr. Herman Steelman and Dr. Claud Ward were instrumental in the planning and development of the Museum. Mr. Turner Neal of McGehee donated a collection of big game animals and 197 acres of land to the University, with the stipulation that the land be sold and the monies utilized for the construction of a museum of natural history. In the interim Mr. Fred Johnson of Huttig donated his large collection of North American and African mammals to UAM. The Museum was named the Turner Neal Museum of Natural History in honor of Mr. Neal.

Construction was initiated in 1974 and the outer shell of the Museum was soon completed. Private contributions of funds and building materials from many parties as well as University aid of additional funds and labor have developed the Museum to its present state. Additionally, the family of the late Mr. Albert Garrison of Fordyce donated his collection of big game animals to the Museum.

In 1977 Mr. Joe Guenter applied for and received a National Science Foundation Grant to build a planetarium in the Museum. The Planetarium was named the Pomeroy Planetarium in honor of Mr. Leslie K. Pomeroy, a local amateur astronomer, who served many years on the Arkansas A & M Board of Trustees. The Planetarium is one of only four planetariums in the state and has been used extensively by students in our Astronomy classes and by the general public as well.

Currently on display are the collections of North American and African big game animals, two 360 gallon aquariums of native and tropical fishes, archaeological materials, minerals, and various plant and animal displays. The Museum houses the UAM Herbarium and UAM Collection of Vertebrates, which are used in teaching and research. Additional exhibits are planned for the future.

The UAM Herbarium houses approximately 21,000 vascular plant specimens, the majority from southern Arkansas and northern Louisiana. Included are 316 historically significant Dwight Moore collections of Arkansas trees and grasses1 and more than 500 specimens from Warren Prairie, a local site and state Natural Area comprising the largest saline soil prairie in the state. (At least ten species of vascular plants are known in Arkansas either exclusively or principally from within its borders.) The plant collections serve as an important resource for both teaching and research. The UAM Herbarium provides free to the general public identifications of native and cultivated plants, and an active specimen exchange program is maintained with more than a dozen institutions in the eastern and central United States.

The UAM Collection of Vertebrates in the Turner Neal Museum of Natural History contains an extensive collection of vertebrates for teaching and research. The collection, consisting primarily of Arkansas specimens, has been catalogued and computerized for more ready access to records. Catalogued specimens to date include 1000 fishes, 1900 amphibians and reptiles, 80 birds and 50 sets of bird eggs, and 630 mammals. A student mammal study collection numbers 110 specimens. Vertebrate specimens are available for loan to qualified research scientists at other institutions.

A vital component of any museum is the research and teaching collections it houses; ours is no exception. Specimens from the Museum's collections have been used in teaching General Zoology, Invertebrate Zoology, General Botany, Regional Flora, Ichthyology/Herpetology, Ornithology/Mammalogy, Natural History, Wildlife Ecology and Management, and Introductory Earth Science. The Museum's displays and collections complement the education of students in all disciplines, but especially those in the sciences, forestry, and agriculture. Additionally, the collections serve faculty members and other visiting scientists engaged in research in areas such as the flora of Arkansas, plant taxonomy, vertebrate taxonomy, wildlife biology, timber management and site analysis, silviculture, dendrology, and weed biology.

The development of a museum is an ongoing endeavor. In reality a museum is never finished and shouldn't be, for it's constantly changing. We are adding new natural history displays and improving older ones. New specimens regularly augment to the floral and faunal collections, adding to their geographical coverage, historical significance, and scientific value.

Since opening in 1978 over 50,000 individuals have toured the facility. The Museum serves as an educational center for public school students, UAM classes, senior citizens, scouting and 4-H groups, and the general public. The Museum is a vital resource of the UAM Campus and provides the citizens of southeast Arkansas with an educational opportunity that otherwise would be unavailable.